Can you lead in rough times?

A great thinker once said: “Everyone likes growth — but no one likes change”. As a manager, you’ve probably learned the truth of this the hard way. But part of management work is to identify and handle resistance – and here yo can read more about how to do that. 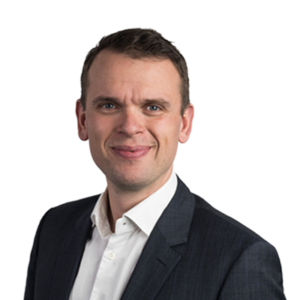 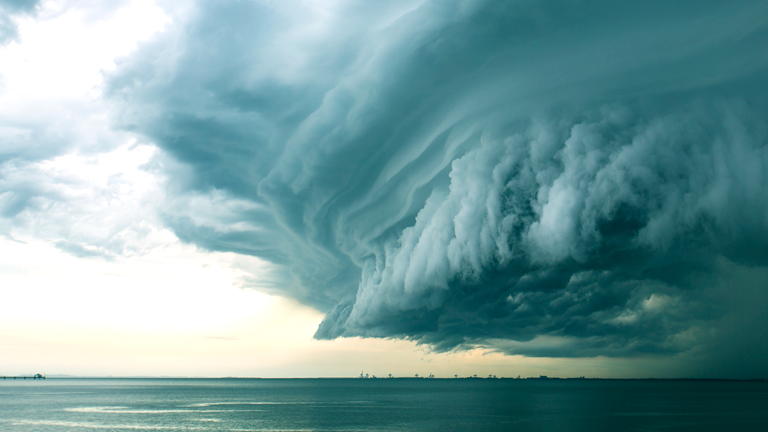 You present the new strategy with both nerve, pathos, and humor – the last big step in a long and demanding strategy process, where everything has been carefully thought through. But that will still be followed by months of resistance and unwillingness to cooperate, and the success seems to disappear out of sight.

It doesn’t necessarily have to do with the strategy or communication. But perhaps you’ve overlooked an important task in your own and your middle managers’ work – namely handling potential employee resistance.

By now, we’ve all learned that we have to be flexible, but resistance to change is natural and inevitable. The skilled manager must therefore recognize the different types of resistance and be able to handle it so that the organization can reach its goals.

Intenz draws inspiration from the American psychologist and change expert Rick Maurer. He has established three levels of resistance that can be experienced individually or in combination with another: 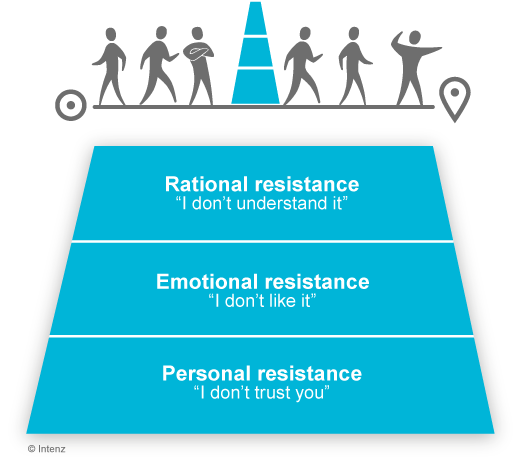 Rational resistance – “I don’t get it”

This type of resistance is the easiest to handle. It’s based on a lack of knowledge and dialogue and can thus be solved through the right level of information. To help, you can use the communication tool ‘what, why, and how’ as a checklist: What are we doing? Why are we doing it? And how are we doing it?

Of course, it can be difficult to know when people know enough, who should know what, and, not least, what the correct timing is. But with these three questions you can identify the challenges and ensure that the right information is delivered when people need them.

And in this context it’s a important to remember focusing especially on the ‘why’. You may have explained both the competences, resources, and time spent on the changes, but the organization will fail if the employees aren’t sufficiently involved and understand the overall reason for why they need to change their behavior.

Another type of resistance that can be somewhat harder to figure out is emotional resistance. It’s triggered by a very basic human emotion – the fear of losing something.

Change can cause employees to lose influence, identity, relationships, status, predictability, or, in extreme cases, their jobs. This form of resistance is thus a completely natural reaction – no matter how unfounded it may seem to you as a manager.

A classic example could be a loyal 59-year-old employee who reacts very critically when familiar analog systems are replaced with digital tools. For 32 years, he has built up his position as the ‘Godfather of the archive’, so a new web-based archive – which may even have to be shared with newly acquired subsidiaries – looks to him like a one-way ticket to early retirement.

The challenge, however, lies in the fact that employees rarely speak up about how the feel. Instead, they’ll typically react with something resembling rational resistance, e.g. arguments such as “We don’t have time for that”, or “We’ll never make it on time”. And it all becomes even more complicated if you, as a manager, don’t have a close relationship with the employees.

Emotional resistance cannot, by its very nature, be dealt with through information alone. Instead, the manager must enter into a dialogue with the employee(s) to identify the possible loss at stake – are there employees involved who, with a change in, e.g., job title, assignments, or physical location, might fear they’ll lose something? Have they been thoroughly informed about what it will actually mean for them – now and in the future? And how can you clarify future prospects? This could be in the form of, e.g., promises of job security, training, reorganization, etc.

As a manager, you have to be willing to listen and to ask questions about the concerns that change raises. Quite often, simply feeling that your manager listens to you can take some of the pressure off. A feeling of “we’re in this together” strengthens the employees’ feeling of unity.

The last type of resistance is the most difficult and most risky to deal with. This is about the failed relationship between employees and managers. About employees who no longer trust the management. It can be on an individual level (manager as well as employee) – and it doesn’t necessarily have to do with the manager’s personality, but about what he/she represents.

If you’ve ever experienced trouble in the relationship with a group of employees, you know that both parties are often fully aware of the problem. Some managers are even aware that the employees are talking about it behind their backs. Whether the problem can be solved depends on the manager’s willingness and ability to handle the resistance in a way that doesn’t aggravate the situation.

The solution for this kind of resistance can’t be found in rational arguments or tactical actions – and even more importantly, it can’t be dismissed by the idea that the employees are just being ungrateful or whiny. The cause of the problem is that, at some point, the trust was broken. If the relationship is to be improved, rumors/fake news and old conflicts need be resolved – and that may require both self-awareness, the courage to ask difficult questions (“When did I make you so angry?”), and asking employees for feedback (“How can I comment on your work without you feeling attacked?”). And even then, success is not always assured. In the most extreme cases, this is the type of resistance that requires dismissals.

It all sounds pretty simple, but we all know from experience that resistance is what really puts you to the test – personally and as a manager.

You should also read these

The leader’s guide to a successful change process

The culture determines the strategy’s success-but why?

Can you lead in rough times?